Have these site news updates sent directly to an RSS reader or straight into your email inbox. This is different from Liz’s Newsletter and requires a separate sign-up.

The Transporter hit the Top 10 at Amazon UK! It is a #1 bestseller in Romantic Suspense and #1 in Contemporary Romance. 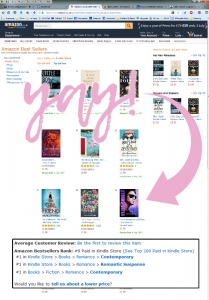 The second book in my Hudson Kings series is on deck! The release date for The Financier is November 21, 2017. At this point, I really couldn’t choose between Shane Sullivan and Nick Dawes. Both. So. Delicious… (Cover and excerpt to follow soon!)

It’s up on the site. It’s up on Amazon. It’s here! I’m in love with the first new cover in the Hudson Kings series. (Look to the right…you can’t miss it!) xo Liz

The first book in my Hudson Kings series finally has a release date of June 6, 2017! Having a release date means there’s a pre-order button too. (To say I’m excited would be an understatement.) Meet Shane Sullivan, The Transporter. Cover and excerpt to follow soon!

Revisions are in on the first book in the upcoming Hudson Kings series. I’ve started the second book. The team is also working on cover art. So, it’s all moving along! Will let you know when there’s a cover to ogle. 🙂

Have these site news updates sent directly to an RSS reader or straight into your email inbox. This is different from Liz’s Newsletter and requires a separate sign-up.

After submitting, be on the lookout for a confirmation email. If you don’t see it soon, please check your spam folder. Thanks!